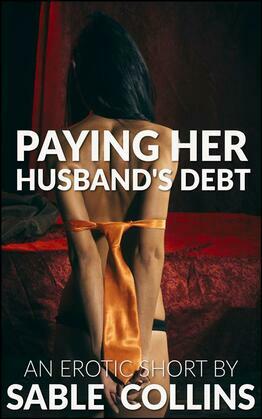 by Sable Collins (Author)
Buy for €3.99
Fiction Erotica Romance Adult
warning_amber
One or more licenses for this book have been acquired by your organisation details

What would it take you to come clean. Fess up hidden secrets that have been haunting you for quite some time. Would you continue to turn a blind eye and live as best as you can until your poker face was ripped off you? Nate played the game too long and his innocent, naïve wife, Kennedi, was left to pay the debt in full. She bravely put up a strong façade but quickly discovered that she could come out on top and free some of her own burdens alone.

Pete half lead, half dragged Kennedi to the counter where he shoved her forward, bending her torso awkwardly into the tile, her face smooshed into one of the pizza boxes. He kicked her legs open widely and planted his knees into the back of hers to steady her before he drove his searing, rock hard rod up her pussy, driving up with each panting thrust. She clenched and screamed uselessly into his hand and he pulled out after only three of four thrusts. “Nope….not quite ready yet. It’s okay. Shhhhhh. It’s okay. I’ll warm you up first.”

Nate veered forward, futilely making an effort to get to her but was soon reprimanded with a backhand punch to the gut from Eli. “Don’t try it dude,  I swear to God, I’ll cut you!” Nate wept silently as he reluctantly ceased his struggling, his eyes caught focus on Kennedi’s as he conveyed his guilt and shame at her. She blinked back, her eyes also brimming with tears.

Pete pushed her down to her back on the kitchen floor before he pulled out a chair and sat next to her, placing one booted foot into her throat. “Now. Back to you little Princess. What I want you to do is spread your legs and get yourself all wet and ready for my cock.  Me and my crew here,”, he slapped Nate on the thigh as if to induct him into their sick twisted gang, “are gonna watch really close and make sure you’re good and hot for us. Well, maybe not you Nate, but me and Eli for damn sure. Understand? Good. Get to it whore, show us how to make you greasy.”

Kennedi leaned back as she was told, did her best to calm her breathing as she spread her legs and commanded her fingers to pull her pussy lips open giving the men a look inside. She tried pretending that she was at her annual OBGYN appointment, she tried telling herself that she was having a nightmare, that she was watching a slasher film…anything but what she was being forced to do in reality, but it was useless.

Pete just shook his head, unamused, and he pulled his belt from the loops at his jean’s waistline. Wrapping one end around his fist, he drove down the buckled end right into her cunt. She stifled a howl of sheer pain which urged him to repeat the whipping. She tried closing her thighs, but his boot pressed down harder against her windpipe. He ceased flailing and waited for her again. She nervously spread again and touched her burning bruised slit, finding it to be glossed over with a thin layer of glistening pre cream, even her clit responded to the touch.

Over and over, she plied her pussy with the strokes she knew Pete wanted to see and as much as she detested it, her body reacted out of biological stimulation. Pete’s breathing began to grow heavier as he watched and oddly enough, that sound coerced Kennedi to slip her finger deep inside her twat, circling it around before sliding in two more and pumping up and down slowly, grinding her slim hips into a sensually hypnotic motion.