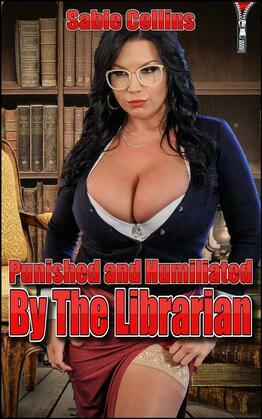 Punished And Humiliated By The Librarian

de Sable Collins (Autor)
Comprar por 2,99 €
Ficción Erótica
warning_amber
One or more licenses for this book have been acquired by your organisation details

I slapped each cheek ten times, then rubbed them raw, then repeated the dose. Madison was wriggling and trying to squeal but it was no use. She couldn’t escape. Having abused her pretty ass with the magazine, I moved on to something a little heavier in the shape of nineteenth century dictionary. It was heavy and not easy to wield, but I managed to give her another twenty strokes, which left her red butt imprinted with the embossed title of the book.

When I let her down, tears were streaming down her face, and her mascara had run a little, but I wasn’t about to take pity on her. Tying her hands behind her back again, I picked up a pair of scissors from my desk and snipped away at her little top. As it finally gave way to reveal her tanned, heavy breasts, there was a gasp from the crowd, and another murmur of approval as I slapped her breasts for being a dirty whore who didn’t wear a bra.

Ripping the tape off her mouth, I pointed to the floor and, thinking better of protesting, she dropped to her knees. Taking one of the cans of soda I had confiscated from her and her friends earlier, I spilled some on the floor and ordered her to lick it up.

It was gratifying to note that she had already succumbed to my authority as she didn’t say a word, just bent forward on her knees, lifting her ass up in the air, diligently lapping away at the spilt orange liquid on the hard wood floor, pressing her face to the ground. As she did so, some of the boys gathered behind her to admire the view and I smiled benignly at them. I could see that most of them were bulging in their pants, and the moment was almost here.

“Good girl,” I said, pulling her up by her hair once again. She squealed a little, but didn’t protest too much, even as I dragged her to my desk. Sweeping all of the books and papers off the surface, I forced her head down until she was lying across the desk and then I beckoned the boys over.