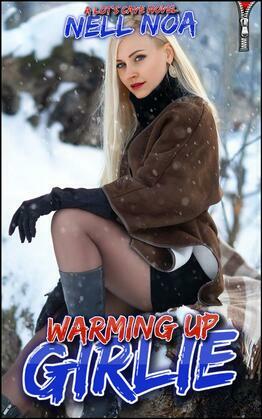 Recent high school graduate Marissa finds herself trapped on a snowy mountainside while on vacation at a ski resort. Lucky for her, a mountain man saves her from freezing to death. Unluckily for her, he ferociously decides to use a very intimate method to mercilessly warm her back up. Savage! Brutal!

To her absolute disbelief, his hands went so far as to slide underneath her sweater, his too-warm fingers drawing a line of heat up her skin. He was going to take all of her clothes off?

This couldn't be happening. How was this happening? She felt as if her body had slowed down while the rest of the world kept spinning on. She could still hardly believe she had been rescued from the snow, yet somehow, she was here, on her back, being stripped down to her skin. It didn't make sense.

He didn't even bother with a response. He slid the sweater up, exposing the entirety of her torso and chest, leaving the fabric to cover her face and arms. Marissa spent a moment in the darkness underneath her cashmere, trying not to think about how her baby blue bra was fully on display for this strange man, the cups held precariously together by a little clasp in the middle.

She jerked back into action when she felt his fingers pulling at the waistband of her snow pants. She struggled against where the sweater was wrapped around her arms, twisting her hips away as much as she could, for all the good it did. By the time she slipped her arms free, he had already pulled her pants down to her thighs.

She grabbed at her waistband, but her numb fingers couldn’t combat against his force. He yanked her pants down her legs, and when he reached her ankles, he unlaced her boots, and pulled everything off.

Marissa had the sudden, awful awareness that she hadn’t been saved at all.