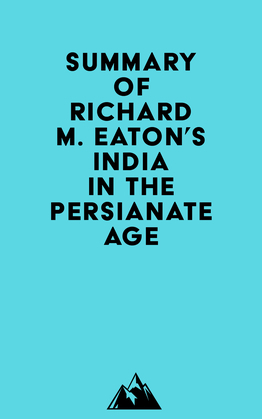 Summary of Richard M. Eaton's India in the Persianate Age

by   Everest Media (Author)
Buy for $3.99 Excerpt
Nonfiction History History by country Asia India
warning_amber
One or more licenses for this book have been acquired by your organisation details

#1 In the early second millennium, two armies marched from opposite directions and raided north India. The first was led by a general acting on the authority of Rajendra I, maharaja of the Chola empire, towards the extreme southern end of the Indian peninsula. In 1022, his army marched 1,600 kilometers north from the Cholas’ royal and ceremonial capital of Tanjavur.

#2 The Cholas were the dominant power in the eastern Indian Ocean at this time. In October 1025, the son of a Turkish-speaking Central Asian slave marched out of Ghazni in eastern Afghanistan with 30,000 cavalry behind him. He headed south-east through the craggy ravines of the Sulaiman Mountains and descended into the low, lush Indus valley.

#3 The raid on Somnath, which was recorded in Persian chronicles, was never mentioned in the local Hindu inscriptions. The silence of these sources suggests that the raid was either forgotten altogether or viewed as just another unfortunate attack by an outsider.

#4 The invasions of Rajendra Chola and Mahmud of Ghazni had many similarities, but their differences highlight the radically different political cultures in early-eleventh-century South Asia. The older political culture, informed by a body of Sanskrit texts, had existed for many years before the rise of Chola power in south India.