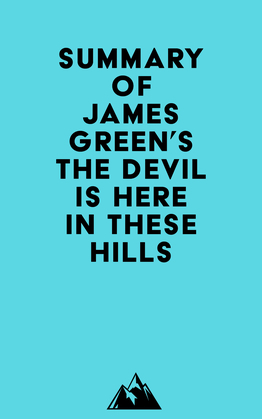 Summary of James Green's The Devil Is Here in These Hills

by   Everest Media (Author)
Buy for $3.99 Excerpt
Nonfiction Social science Political science Labor & industrial relations
warning_amber
One or more licenses for this book have been acquired by your organisation details

#1 Virginians had known about the mineral wealth buried beyond the Blue Ridge since the mid-eighteenth century, but it took another century and a half for industrialists to exploit the rich deposits of black gold laced through the mountains of the Allegheny Plateau.

#2 When the French and Indian War ended in 1763, hundreds of colonial soldiers who fought for the British poured into the lush valleys beyond the Blue Ridge, taking land that the Cherokee people had occupied for centuries.

#3 Moses Keeney, a pioneer who settled in what is now West Virginia, had a few sons who continued to farm, hunt, and cut lumber along Cabin Creek in a place called Eskdale. In the mid-nineteenth century, none of the Keeneys could foresee the changes that would come to their valley or the entire region.

#4 The state of West Virginia was built on the coal industry. In the early twentieth century, agents acquired forty-five thousand acres of land in McDowell County using capital invested by partners from London, Philadelphia, and Staunton, Virginia. These capitalists then leased these lands to five mining companies ready to exploit the state’s purest coal deposits.