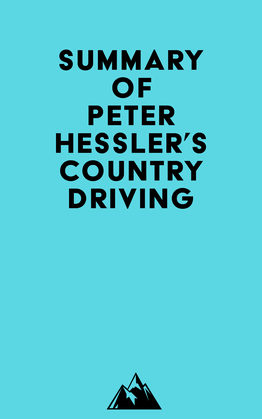 by   Everest Media (Author)
Buy for $3.99 Excerpt
Nonfiction Travel Asia China
warning_amber
One or more licenses for this book have been acquired by your organisation details

#1 I had lived in China for five years by 2001, and I had traveled passively by bus, plane, boat, and train. But when I got a Chinese driver’s license, I realized that nothing could be taken for granted.

#2 When I began planning my trip, a Beijing driver recommended The Chinese Automobile Driver’s Book of Maps. The book divided the nation into 158 separate diagrams, and there was even a road map of Taiwan, which is included in any mainland atlas for political reasons.

#3 The book made me want to go west. The charts of the east and south looked busy, but the north and west were still home to vast stretches of agricultural land. The maps of those regions had a sense of space that appealed to me.

#4 The Chinese had considered converting the Great Wall into a highway in the 1920s. In 1931, the Students’ Magazine proposed modernizing the structure, and it was supported by the government.