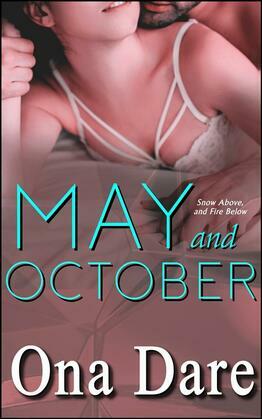 The sun finally dipped below the horizon and guests started leaving in dribs and drabs. Soon she was alone, sipping the last of her coffee. She should have brought a sweater but hadn’t known she would be out after sundown.

Donal had a way of sneaking up and catching her unawares before she could practice a response. He was warm against her back and when he kissed her neck she almost melted. It wasn’t some weak little peck, either. He buried his face in her neck, breathing her in, and sucked gently at her skin.

“The pool is heated. Join me for a dip and we can talk.”

Chloe took his hand and followed him to the pool. He left her there to undress while he turned the lights off. He wanted darkness in the water. Privacy. He wanted it to be his lair.

When he turned to go back to her, he lost his breath. She was stunningly beautiful, naked, and unashamed.

He walked slowly, taking in every inch of her body from her head to her toes. Like so many other women these days, Chloe kept herself clean shaven which only enhanced her aura of innocence. Perhaps that was what he liked most about her. Even at her age, she still had an air of innocence about her.

When Donal took off his shirt, Chloe almost gasped. She had been right about him. He was an Adonis; a mature Adonis with a sprinkling of grey hair on his chest, and abs that looked rock hard. When he unzipped his pants and let them fall to the ground, she did gasp. He stepped out of them and walked into the pool, turning to hold out a hand to her.

Chloe had never seen a man with a clean shaven groin and the sight of it immediately had her wanting to nuzzle him there to feel the softness. To breathe in the male scent of him.

The water was warm like the ocean after a heat wave. Donal sat down on a ledge under the water and pulled her to sit on his lap.