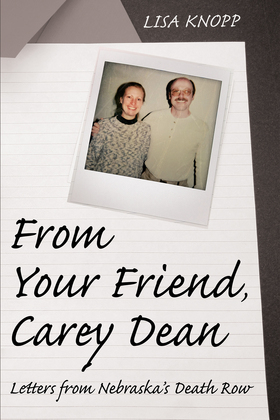 From Your Friend, Carey Dean

Letters from Nebraska’s Death Row
by Lisa Knopp (Author)
Buy for $21.00 Excerpt
Nonfiction Biography & autobiography Religious Religion Christianity
warning_amber
One or more licenses for this book have been acquired by your organisation details

When Lisa Knopp visited Nebraska's death row with other death penalty abolitionists in 1995, she couldn't have imagined that one of the inmates she met that day would become a dear friend. For the next twenty-three years, through visits, phone calls, and letters, a remarkable, platonic friendship flourished between Knopp, an English professor, and Carey Dean Moore, who'd murdered two Omaha cab drivers in 1979 and for which he was executed by lethal injection in 2018. From Your Friend, Carey Dean: Letters from Nebraska's Death Row, tells two other stories, as well. One is that of a broken correctional system (Nebraska's prisons are overcrowded, understaffed, and underfunded, and excessive in their use of solitary confinement), and what it's like to be incarcerated there, which Moore frequently spoke and wrote about. The other is the story of how a double murderer was transformed and nourished by his faith in God's promises. Though Moore and Knopp were different types of Christians (he was a Biblical literalist and an evangelical; she is a Biblical contextualist with progressive leanings), they shared faith in God's love, grace, mercy, and abiding companionship.