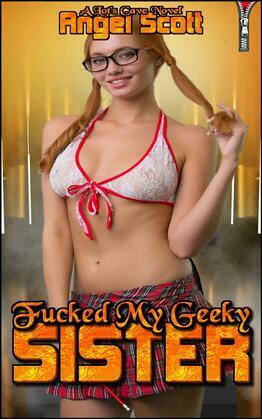 de Angel Scott (Autor)
Comprar por 3,99 €
Ficción Erótica Romance Adulto
warning_amber
One or more licenses for this book have been acquired by your organisation details

Being a miracle baby sure can feel special. But not getting sexual fun can be frustrating. Can poor Mallory get everything she desires? Or is she doomed to be alone? Can she make her brother see her as more than geeky?

“Damn it, sis.” Steven growled at her. He tried to close the curtain, but his sister kept a hold of it. Stronger than she looks. Steven thought to himself.

“Tell me. Did you do the dirty deed with mom?” Mallory repeated the question.

“Why her? What happened with your girlfriend?”

“She’s hot and I am still dating my girlfriend. Nothing’s changed. I still fuck both women.” Steven said as he put his body under the water. He smirked at his own comment.

“So, you cheated. Way to go, bro!” Mallory rolled her eyes. Not impressed.

“What’s it too you? You’re my sister. Not my keeper. Or girlfriend.” Steven sniped.

“Why can’t I get the dirty deed?” Mallory asked. Tears threatened her eyes.

“You’re a dork. A geek. For one. Not all dudes like geeks and dorks. For two, you do not put yourself out there. Someday maybe sis.” Steven did not know what to say to that.

“What makes me a geek and a dork? Are those two different things?” Mallory wanted to know.

“A geek likes to read, do chess, play games. A dork is someone who snorts when they laugh, wears glasses, stumbles around, jokes around, etc. You do all those things, sis.”

“No! I am popular. I am a jock. A football player.” Steven shook his finger at his sister.

“Yep. You’re my geeky brother. Who does not do the quarterback position?” Mallory nodded and reminded her brother.

“Still in football. That makes me likeable. Plain and simple. The ladies like me.” Steven smirked and winked at his sister. While still trying to pull the curtain closed. He needed a damn shower.

“I guess I’m a little jealous. I want a lover. A connection.” Mallory complained. The water started to spray her. Her arms started to get wet now. Her blondish, small hairs on her arms stuck straight up. She hated her body. Hair, body, pimples, glasses. Everything.

“Like I said, you will get someone. Someday. College will be new people. New connections.” Steven said with a confident tone.

“That’s still five months away, bro. I don’t want to go to college as a virgin! People will think I’m a loser!” Mallory squealed.

Steven sighed. How would he explain that lots of people thought she looked and sounded dorky? But yet make her feel less sad? Impossible task. The silence did not help matters since Steven heard sniffing. He saw some tears now inside his sister’s eyes. The only thing they shared in common. Green eyes from their mother.

Mallory felt like a piece of garbage. Something nobody wants. Why didn't her brother touch her like he did their mom and his girlfriend? Didn't she deserve love and affection. Touching and attention. With the tears streaming down her face, Mallory let go of the curtain and ran out of the bathroom. She heard yelling. But she did not pay attention to it. She wanted to be alone. To feel the shame. Alone.

Steven yelled out the word, sis, but he saw her continue to run like the wind. He growled as he turned off the water.