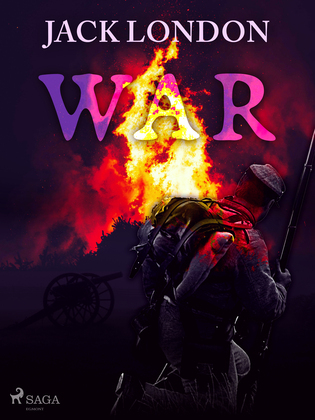 by Jack London (Author)
Buy for $2.99 Excerpt
Fiction Classics Mystery & detective Traditional British
warning_amber
One or more licenses for this book have been acquired by your organisation details

The footsteps of the enemy approach. Nearby, a young, voiceless calvary officer lies ready to act, but not in the way you might think. Words in time of war prove powerful, and in Jack London’s compelling novel, one young man is about to empty his lot like an overturned barrel. Conversations sweeping morality and humanity lose their meaning, whilst human kindness and the gullible nature of combat take hold.

Crafting a simply written yet deeply profound exploration of the everyday life of soldiers, ‘War’ is a journey into the contradictory, complex and muddled web of human strife. A must-read for fans of Andrew Garfield’s ‘Hacksaw Ridge’.

Jack London (1876-1916) was an American novelist, journalist and social activist. Celebrated today as a pioneer of commercial fiction and American magazines, he is also dubbed an innovator in the science fiction genre. London’s popular works span ‘The Call of the Wild’, ‘White Fang’ and ‘Sea Wolf’, along with short stories such as ‘An Odyssey of the North’. Many of his novels are set in the Gold Rush, 19th century America – proving ideal for history, adventure and Western lovers alike. Jack London remains today an inspiring writer ahead of his time, both on the page and throughout his political life.