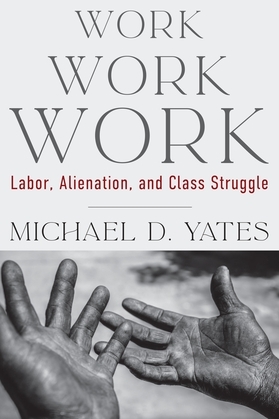 For most economists, labor is simply a commodity, bought and sold in markets like any other – and what happens after that is not their concern. Individual prospective workers offer their services to individual employers, each acting solely out of self-interest and facing each other as equals. The forces of demand and supply operate so that there is neither a shortage nor a surplus of labor, and, in theory, workers and bosses achieve their respective ends. Michael D. Yates, in Work Work Work: Labor, Alienation, and Class Struggle, offers a vastly different take on the nature of the labor market.

This book reveals the raw truth: The labor market is in fact a mere veil over the exploitation of workers. Peek behind it, and we clearly see the extraction, by a small but powerful class of productive property-owning capitalists, of a surplus from a much larger and propertyless class of wage laborers. Work Work Work offers us a glimpse into the mechanisms critical to this subterfuge: In every workplace, capital implements a comprehensive set of control mechanisms to constrain those who toil from defending themselves against exploitation. These include everything from the herding of workers into factories to the extreme forms of surveillance utilized by today’s “captains of industry” like the Walton family (of the Walmart empire) and Jeff Bezos.

In these strikingly lucid and passionately written chapters, Yates explains the reality of labor markets, the nature of work in capitalist societies, and the nature and necessity of class struggle, which alone can bring exploitation – and the system of control that makes it possible – to a final end.