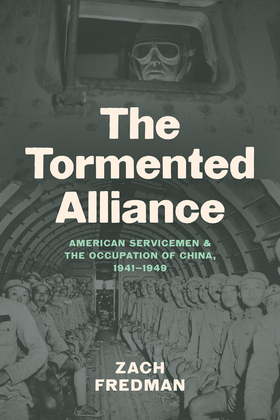 After Japan's attack on Pearl Harbor, leaders in China and the United States had high hopes of a lasting partnership between the two countries. More than 120,000 U.S. servicemen deployed to China, where Chiang Kai-shek's government carried out massive programs to provide them with housing, food, and interpreters. But, as Zach Fredman uncovers in The Tormented Alliance, a military alliance with the United States means a military occupation by the United States. The first book to draw on archives from all of the areas in China where U.S. forces deployed during the 1940s, it examines the formation, evolution, and undoing of the alliance between the United States and the Republic of China during World War II and the Chinese Civil War.

Fredman reveals how each side brought to the alliance expectations that the other side was simply unable to meet, resulting in a tormented relationship across all levels of Sino-American engagement. Entangled in larger struggles over race, gender, and nation, the U.S. military in China transformed itself into a widely loathed occupation force: an aggressive, resentful, emasculating source of physical danger and compromised sovereignty. After Japan's surrender and the spring 1946 withdrawal of Soviet forces from Manchuria, the U.S. occupation became the chief obstacle to consigning foreign imperialism in China irrevocably to the past. Chinese leader Chiang Kai-shek lost his country in 1949, and the U.S. military presence contributed to his defeat. The occupation of China also cast a long shadow, establishing patterns that have followed the U.S. military elsewhere in Asia up to the present.