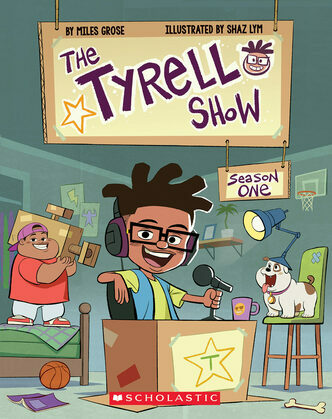 The Tyrell Show: Season One

Tyrell is a funny, imaginative 11 year-old-heading into his final year at Marcus Garvey Elementary. But soon after he starts, his high hopes that being a 6th grader and now one of the oldest kids in the school will automatically make him one of the coolest and wisest kids around pretty much go POOF!

For starters, SOMETHING seems to be going on with his best friend, Boogie. He’s just not himself. Plus, schoolwork is uh, way harder than maybe he thought it would be. And to make things worse, there’s a school show coming up at the end of the year that Tyrell is terrified of! Of course, it’s not all bad. A pack of rabbits gets loose in the school. And when Principal Davis fell asleep with the intercom on, snoring for all the school to hear? Priceless. Tyrell relives these events and copes with all this stress the only way he knows how — through his imaginary “podcast” recording sessions held on the floor of his bedroom, often with his lovable bulldog Monty at his side.

Tyrell Show is a perfect series for anyone who’s ever held their own talk show on a bedroom floor with a tape recorder, iPad, or computer at their side. This highly illustrated coming-of-age series starring young African American boys is sure to put a smile on the face of anyone who picks it up.