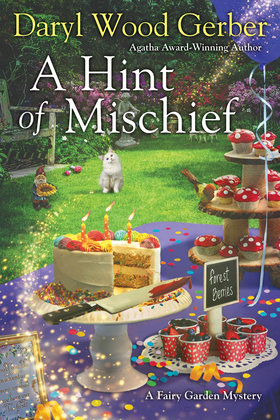 A Hint of Mischief

by Daryl Wood Gerber (Author)
Buy for $14.41 Excerpt
Fiction Mystery & detective Women sleuths
warning_amber
One or more licenses for this book have been acquired by your organisation details

The proprietor of a fairy garden and tea shop in Carmel-by-the-Sea, Courtney Kelly has an occasional side gig as a sleuth—with a sprinkling of magical assistance. . . .

Courtney has thrown a few fairy garden parties—for kids. But if a local socialite is willing to dip into her trust fund for an old sorority sister’s fortieth birthday bash, Courtney will be there with bells on. To make the job even more appealing, a famous actress, Farrah Lawson, is flying in for the occasion, and there’s nothing like a celebrity cameo to raise a business’s profile.

Now Courtney has less than two weeks to paint a mural, hang up tinkling windchimes, plan party games, and conjure up all the details. While she works her magic, the hostess and her girlfriends head off for an indulgent spa day—which leads to a fateful facial for Farrah, followed by her mysterious death. Could the kindhearted eyebrow waxer who Farrah berated in public really be the killer, as the police suspect? Courtney thinks otherwise, and with the help of her imaginative sleuth fairy, sets out to dig up the truth behind this puzzling murder . . .

Praise for Daryl Wood Gerber’s A Sprinkling of Murder