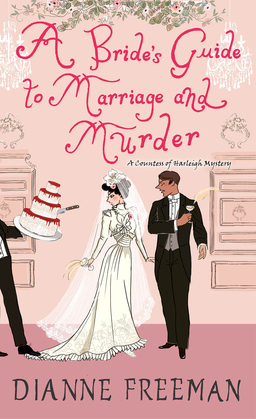 A Bride's Guide to Marriage and Murder

by Dianne Freeman (Author)
Buy for $22.10 Read sample online Download sample
Fiction Mystery & detective Women sleuths Historical
warning_amber
One or more licenses for this book have been acquired by your organisation details

On the eve of her marriage to George Hazelton, Frances has a great deal more on her mind than flowers and seating arrangements. The Connors and the Bainbridges, two families of American robber barons, have taken up residence in London, and their bitter rivalry is spilling over into the highest social circles. At the request of her brother, Alonzo, who is quite taken with Miss Madeline Connor, Frances has invited the Connor family to her wedding. Meanwhile, Frances’s mother has invited Mr. Bainbridge, and Frances fears the wedding may end up being newspaper-worthy for all the wrong reasons.

On the day itself, Frances is relieved to note that Madeline’s father is not among the guests assembled at the church. The reason for his absence, however, turns out to be most unfortunate: Mr. Connor is found murdered in his home. More shocking still, Alonzo is caught at the scene, holding the murder weapon.

Powerful and ruthless, Connor appears to have amassed a wealth of enemies alongside his fortune. Frances and George agree to put their wedding trip on hold to try and clear Alonzo’s name. But there are secrets to sift through, not just in the Bainbridge and Connor families, but also in their own. And with a killer determined to evade discovery at any cost—even if it means taking another life—Frances’s first days as a newlywed will be perilous indeed . . .