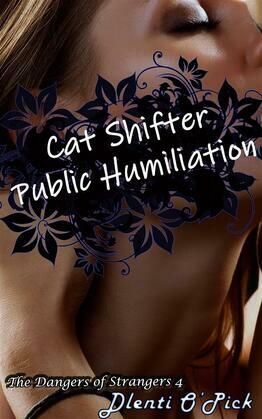 Book 4 of 'The Dangers of Strangers'
by Dlenti O'Pick (Author)
Buy for €2.99 Excerpt
Fiction Erotica Romance Adult
warning_amber
One or more licenses for this book have been acquired by your organisation details

Male. Seeking someone sweet. New Client. Penelope has just started her new job. Granted, reading steamy lines from the script isn't the glamorous work that she had prepared for, but she isn't qualified for much. She's a sheltered Cat Shifter without much knowledge of the world, so when the man on the other end of the phone offers her everything she could have ever wanted, how could she resist?

"What would you do to me, if we were to meet?" she wants to know.

A thoughtful hum, and then, "What would you like me to do?" he asks.

There's a script for this too, but she had read them all before answering the call and knows the answer immediately. "I thought you could tie me up."

She hears the sharp intake of breath from the other side. "Do you enjoy having control taken from you?"

She has never had control in her life. It's odd, now that she had been given it, she wants to surrender it back. She licks her lips. "I like- I like being helpless. I like it when you tell me what to do," she says. She has had that structure her entire life, people telling her exactly what to say, what to do, what to eat. She misses it more than she thought she would, but at the same time, she doesn't regret choosing to leave either. She doesn't think she's ready to get married to a stranger. Maybe if the stranger was Liam...

"I enjoy telling you what to do as well, darling," he hums. "I could tie you up, or simply hold you down. You're a small thing, aren't you, darling? Would you fight back?"

"I think I would," she replies. "I'll scratch you, kick and push and try and get away."

"You can't get free even if you tried, love," he says.

"You'll have me trapped," she whispers, breathless. It's almost too genuine, how eager her voice gets at the thought. The image of him looming over her, prone body flexing against his hands, unable to fight back, to get away. He could do anything he wants with her- to her body. "I'm very pale and I bruise easily," she murmurs.

"Mm... you would bear bruises the shape of my hands," he muses with a deep rumble to his voice. She can hear him undoing his belt. She's gotten very good at identifying that sound now.

"I would," she says, her voice trembling as her hand skims down her chest to rest on her knee. "I don't know you and you're bigger than me. You would scare me a lot when you grab hold of me."

"Poor thing," he hums. "I'll tie you down, restrain your legs so that you can't hurt yourself."

"Or you," she interrupts, flushing.

"Oh, darling. You couldn't hurt me even if you tried," he murmurs, dark and deep.