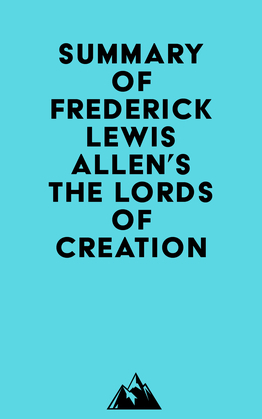 Summary of Frederick Lewis Allen's The Lords of Creation

by   Everest Media (Author)
Buy for $2.99 Excerpt
Nonfiction History History by country United States
warning_amber
One or more licenses for this book have been acquired by your organisation details

#1 The American economy experienced a boom beginning in 1897, which was only briefly interrupted by the outbreak of the Spanish War. But it returned to a very different country from the America of the eighties and nineties. The frontier had now been closed for many years.

#2 The idea of outward conquest had been given a powerful impetus by the opera-bouffe victory in the Spanish War, which had bestowed upon a surprised country a group of islands across the Pacific. The troops were hardly back from Cuba, the air was still filled with the echoes of There’ll Be a Hot Time in the Old Town Tonight, and Admiral George Dewey was still the nation’s adored hero.

#3 In the 18-seventies and 18-eighties, the American economic ideal was free competition. Almost everyone believed in laissez-faire, and the ideal economic order was a sort of endless game in which anyone could enter.

#4 In the oil industry, the control of competition was provided by a severe young man named John D. Rockefeller, who had run his little refining business in Cleveland with such calculating efficiency, bought out his immediate competitors with such boldness, and wrung secret privileges from the railroads with such shrewdness that he was able to dictate to the industry.