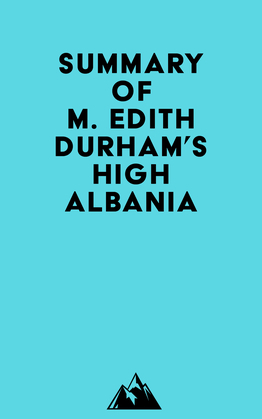 by   Everest Media (Author)
Buy for $2.99 Excerpt
Nonfiction History History by country Middle East Turkey & Ottoman empire
warning_amber
One or more licenses for this book have been acquired by your organisation details

#1 The history of Albania, a landlocked country in the Balkans, is a complicated tale of extreme interest. The claims of Greek, Bulgarian, and Serb in the Balkan peninsula are well known, but it has been the fashion always to ignore the rights and claims of the oldest inhabitant of the land, the Albanian.

#2 The ancestors of the modern Servians poured into the peninsula in the first century AD. They overpowered the inhabitants, and reached the Dalmatian coast, burning the Roman town of Salona. The Serb influence grew stronger and stronger.

#3 The Albanians were the last to fall under Turkish rule. They were led by their great hero Skenderbeg, who offered a magnificent resistance. But they had not outgrown the tribal system, and on his death, they broke up under rival chiefs.

#4 The Albanians were a threat to the power of the Turks in Europe, but their attempts were doomed to failure because of the lack of unity caused by the tribal system. Before they were ready to stand alone, the tide of Turkish affairs turned and Russia began to fight for the Serbs.