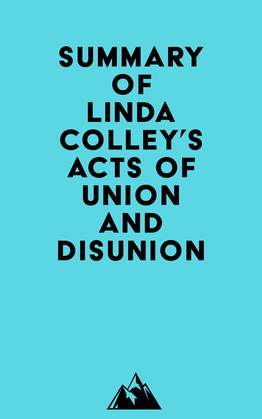 Summary of Linda Colley's Acts of Union and Disunion

by   Everest Media (Author)
Buy for $2.99 Excerpt
Nonfiction History
warning_amber
One or more licenses for this book have been acquired by your organisation details

#1 The divided nature of Britain is not unique, and its experience is not unique in that regard. Every state has experienced internal division, and the current disputes over these divisions possess ample precedent.

#2 The United Kingdom is a recent invention. It only became the official umbrella designation for England, Wales, Scotland, and for all or part of Ireland in 1801. But no one has ever been proud to be a UKanian.

#3 The UK has acquired wide currency in recent decades, as a sort of euphemism. It is used to describe the country as a whole, when in reality, not all of the countries in it feel British.

#4 The British have always been a mixture of different ethnic groups, and the United Kingdom is no different. The leaders of the United Kingdom have had to acknowledge and protect the autonomy and separate rights of the various countries and regions that are contained within the state-nation, while still creating a sense of belonging and allegiance with regard to the larger political community.