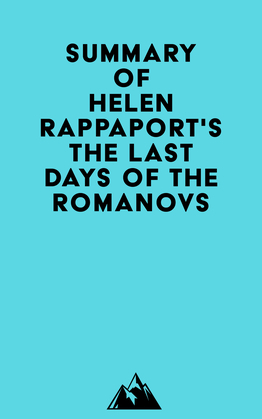 Summary of Helen Rappaport'sThe Last Days of the Romanovs

by   Everest Media (Author)
Buy for $2.99 Excerpt
Nonfiction History Other Revolutionary
warning_amber
One or more licenses for this book have been acquired by your organisation details

#1 The Romanovs traveled from Tobolsk to Tyumen, and then to Omsk, the junction of two major lines on the Trans-Siberian Railway. They were suddenly gripped by fear. Where would they be taken next. Eastwards towards Vladivostok or west towards Moscow and a public trial.

#2 The Tsar and his family were now received into the hands of the Ural Regional Soviet for detention under surveillance. With a bureaucratic flourish, Beloborodov signed the official receipt for them.

#3 The family was reunited, and they were certain that God would take a hand in their fate. They turned to their intense religious faith to sustain them through the days to come.

#4 The Ipatiev House was the prison where the Tsar and his family were kept. It was small by the standards of the more spacious and airy Governor’s House in Tobolsk, but it had a fine view of the lake, public gardens, and city below.