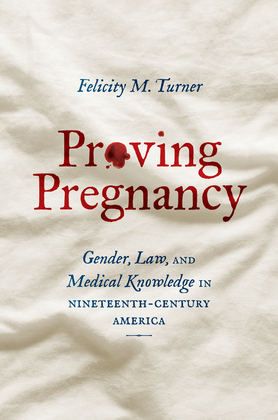 Gender, Law, and Medical Knowledge in Nineteenth-Century America
by Felicity M. Turner (Author)
Buy for $23.99 Excerpt
Nonfiction Law History of law Medical History Social science Sociology
warning_amber
One or more licenses for this book have been acquired by your organisation details

Examining infanticide cases in the United States from the late eighteenth to the late nineteenth centuries, Proving Pregnancy documents how women—Black and white, enslaved and free—gradually lost control over reproduction to male medical and legal professionals. In the first half of the nineteenth century, community-based female knowledge played a crucial role in prosecutions for infanticide: midwives, neighbors, healers, and relatives were better acquainted with an accused woman's intimate life, the circumstances of her pregnancy, and possible motives for infanticide than any man. As the century progressed, women accused of the crime were increasingly subject to the scrutiny of white male legal and medical experts educated in institutions that reinforced prevailing ideas about the inferior mental and physical capacities of women and Black people. As Reconstruction ended, the reach of the carceral state expanded, while law and medicine simultaneously privileged federal and state regulatory power over that of local institutions. These transformations placed all women's bodies at the mercy of male doctors, judges, and juries in ways they had not been before.

Reframing knowledge of the body as property, Felicity M. Turner shows how, at the very moment when the federal government expanded formal civil and political rights to formerly enslaved people, the medical profession instituted new legal regulations across the nation that restricted access to knowledge of the female body to white men.