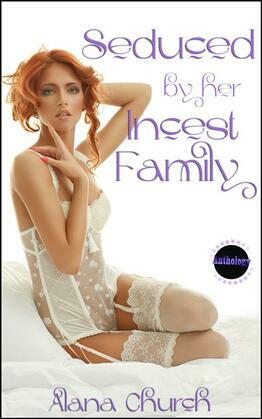 Seduced By Her Incest Family

by alana church (Author)
Buy for €4.99 Excerpt
Fiction Erotica Romance Adult
warning_amber
One or more licenses for this book have been acquired by your organisation details

A DNA test tells shy Alexandra she has a family she never knew about. But what will she do when a weekend visit to a Kentucky horse-farm turns sexy...and she learns that her lovely half-sister, her hunky brothers, and their gorgeous mother are all incestuous lovers? Can Alex find the courage to embrace a new life? Find out in "Seduced By Her Incest Family!"

"Out of the way, you disgusting tramp," Joy said cheerfully. "Damn. I hope my butt looks that good from behind when I bend over," she continued, leering at Alex as she backed up and gave her rear a good, long look. "Does it?"

"I don't know," Alex smiled "I can't see my own rear end. Maybe we should hire a photographer and find out."

Joy tilted her head back and laughed. "Man, that would be so much fun. You and me and Mom, like in those photo shoots that Playboy does. But no." She sobered. "If we do, then Randy and Ricky would spend all their time looking at pictures of us instead of catering to our every whim. Can't have that."

"It's a bit of a sticky situation," Alex agreed. She lifted her eyebrows at her older sister. "'Disgusting tramp'? It's a bit late in the day to be doing to whole sibling rivalry thing, isn't it?"

"Depends. Are you going to borrow all my favorite outfits without asking and try to steal my boyfriend?"

Alex laughed. "Well, we're pretty much the same size," she said, as she turned on the water for the shower. "But wouldn't trying to steal your boyfriends be kind of, I don't know. Redundant? Since they're my boyfriends, too?"

"Only Richard," Joy replied. "Unless you pulled a fast one on me last night and screwed Randy, too. And I don't think you did. I rode him last night until he passed out. Though he wasn't in my bed when I woke up." She followed Alex into the shower, smirking as her little sister raised her eyebrows. "Room enough for two," she said cheerfully. "And no reason not to get friendly. Want to fool around a bit? I really like making out early in the morning. It starts the day off right, you know? Unless you're shy?" Her brows crimped together in sudden worry. "If you don't want me in here, just say so. I'm cool if you need, you know. Some time to get used to things."

"Not...shy," Alex said slowly. "It's not like Mom raised me to believe in hellfire and eternal damnation. It's just...I never..."

Her sister smiled. "With a woman?"

She looked down at the water swirling around her toes. "Yeah."

“Well, it’s not that complicated,” Joy said. “Though you wouldn’t know it, to hear some guys go on and on about how hard it is to make a woman happy in bed. I mean, you already know what works for you, right?” Alexandra nodded. “Then,” her half-sister said, stepping into her arms, her eyes bold, “just do to me what you think I’d like. And I’ll tell you if I don’t.