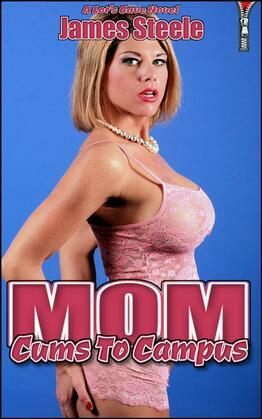 by James Steele (Author)
Buy for €4.99 Excerpt
Fiction Erotica Romance Adult
warning_amber
One or more licenses for this book have been acquired by your organisation details

Hot, voluptuous Sherry, dutifully visits her son, Eric, at his apartment near college every weekend. Sherry hates to go a weekend without him. When she meets a girl in his apartment who bears a striking resemblance in face and body to her, Sherry realizes her son has secret, taboo feelings of his own. All three embark on a trail of lust and love so scorching they don't care who can see them.

Leann seemed nice enough on the surface, but it was impossible to forget the pretty coed had just spent the night in her son’s bed. Sherry was ashamed to realize that the brewing emotion in the pit of her stomach was jealousy, but she was doing her best to keep it from showing. Judging from the smirk on the younger woman’s face she probably wasn’t doing a very good job. She also had the look of a girl who’d been happily taken care of, and Sherry felt herself clench.

“Thanks,” Leann said. “But I have to work the lunch rush at my job today.”

A working college girl, Sherry thought. Instead of finding that to be a point in the girl’s favor, it only made Eric’s mother feel more jealous for some, weird reason. The jealousy was weird enough all on its own.

“How nice. Where do you work?” the mother asked.

Sherry saw a brief flash in her mind of the girl in her Hooter’s uniform, with her impossibly rounded ass packed into those tiny shorts. Shorts that were almost as skimpy as the ones Sherry was wearing.

“Besides,” the younger woman added, “Eric’s really protective of his weekends, so I know he doesn’t want me hanging around any longer than I have to. Now I can see why.”

Sherry caught a devious twinkle in the coed’s eye. It was almost lewd, considering her thinly veiled suggestion. Yet the scantily clad divorcee couldn’t stop the heated blush from betraying her.

“My son and I are just … well, we’re very close. Since my divorce, he’s been very … helpful … supportive. He’s a very special young man.”

Sherry realized it sounded like she was babbling and saying things she shouldn’t. Personal things that were none of Leeann’s business.

“He’s definitely special,” the younger girl said with a leer, as if his mother should know whatever she was alluding to. “But hey, you’ve got nothing to worry about from me. I think it’s really nice you and your son are so… close.”