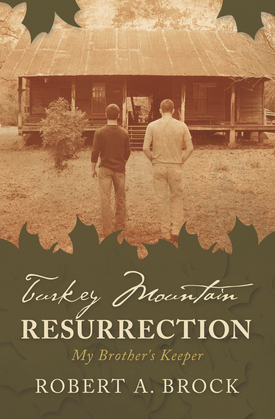 My Brother's Keeper
by Robert A. Brock (Author)
Buy for $3.99 Excerpt
Fiction Science fiction Adventure
warning_amber
One or more licenses for this book have been acquired by your organisation details

Turkey Mountain Resurrection peeks into the male-mystique. Connor and Milo are raised as brothers in the Arkansas hills. Connor, influenced by a helicopter pilot’s sacrifice that saved his life, after R&R returns to Iraq and becomes a MIA. After graduation Milo sets aside his own dreams, enlists in the Army and through several Indiana Jones-type adventures finds his lifelong friend outside Fallujah. Connor returns home a mental and physical invalid. Milo must give up his own life-plans and basically raise Connor and his toddler-son together from diaper stage, through elementary, high school, dating and marriage or live with the guilt of abandoning his helpless friend. Hard work, brotherhood, knee slapping male-humor and brotherly pathos carry the boys through changes from youth to manhood as they become living testimony that God’s grace and man’s compassion for his fellowman are reward enough to make any life worth living.