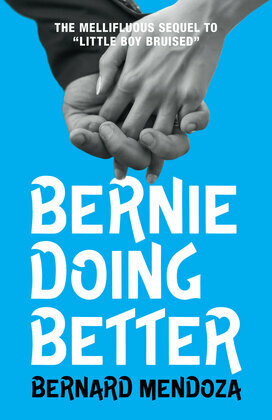 The MELLIFLUOUS sequel to 'Little Boy Bruised'
by Bernard Mendoza (Author)
Buy for $5.44 Excerpt
Fiction Romance Adult Contemporary
warning_amber
One or more licenses for this book have been acquired by your organisation details

Survivor, first, of Hitler's bombs, then of his father's fists (see Little Boy Bruised), Bernie didn't get off to the best of starts but he's nothing if not a trier.

With his one 'claim to fame' having been up before a world-famous British judge* who presided at Nuremberg, Bernie has been making his way as one of nature's favoured scribblers. He somehow inherits the editorship of a rather well-regarded specialised film magazine with an international readership.

All this time, he is wooing Mel, a pretty, blue-eyed sweetheart who's all of 17 and who, happily, has eyes for Bernie too. This is the upside. He's also turning detective, trying to unearth the bones, if there are any, of his father's mysteriously lacking war record. Despite his having - allegedly - served in the RAF, no record exists.

Add to the pudding a previous editor who seems to have flown the coop in Harry Lime's Vienna, a bisexual actress who has taken a shine to both Mel and Bernie (among others) and you might say all the recipe needed was an oil company executive who wants Bernie to find a way of ripping off a rather famous promotional film that won worldwide acclaim in the previous decade.

Then - out of nowhere, it seems - there appears Helva, a young Scandinavian miss who loves London, loves children and finds herself lonely when her partner becomes a North Sea oilman. She also finds herself somewhat fond of Mel.

Mel and Bernie, by now spliced, make room for Helva in their pad and the two young women start sharing broody thoughts. And why not? When the giggling stops, the planning begins. How about a kibbutz (where could you grow oranges without moving to Israel?)? Or how about a playgroup? They even know a place where, just maybe, they might - the two of them - be able to run it.

Life was suddenly full of possibility. And, maybe, just maybe, pregnancy too. It was hugs all round.

And even that wasn't the end of the story...

*He was standing in for an indisposed colleague.