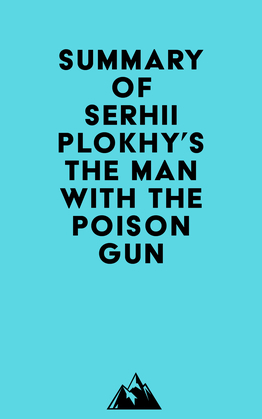 Summary of Serhii Plokhy's The Man with the Poison Gun

by   Everest Media (Author)
Buy for $3.99 Excerpt
Fiction Espionage
warning_amber
One or more licenses for this book have been acquired by your organisation details

#1 In the fall of 1961, American and Soviet tanks faced one another at Checkpoint Charlie in Berlin, and David Cornwell was contemplating the writing of his first bestselling novel, The Spy Who Came in from the Cold. The West German police were interrogating a Soviet spy named Bogdan Stashinsky, who had delivered a bombshell testimony implicating the Kremlin rulers in political assassinations abroad.

#2 The Stashinsky story is one of the first examples of the KGB trying to kill a Westerner in the West. It also demonstrates the impact the Soviet police state had on the population living east of the Iron Curtain.

#3 On October 15, 1959, a man named Heinz Lammer was watching the Opel Kapitan that was owned by the German Museum of Masterpieces of Science and Technology. He was waiting for the owner to come and get it. When the owner came out of the building, he was surprised to see Heinz there.