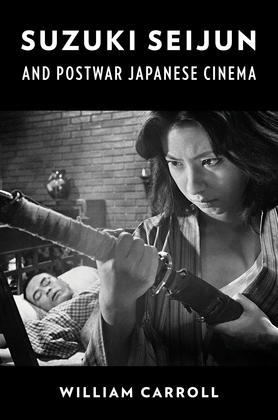 by William Carroll (Author)
Buy for $34.99 Excerpt
Nonfiction History History by country Asia Japan 1945-1989 Arts Film & video Guides & reviews History & criticism
warning_amber
One or more licenses for this book have been acquired by your organisation details

In 1968, Suzuki Seijun—a low-budget genre filmmaker known for movies including Branded to Kill, Tokyo Drifter, and Youth of the Beast—was unceremoniously fired by Nikkatsu Studios. Soon to be known as the “Suzuki Seijun Incident,” his dismissal became a cause for leftist student protestors and a burgeoning group of cinephiles to rally around. His films rapidly emerged as central to debates over politics and aesthetics in Japanese cinema.

William Carroll offers a new account of Suzuki’s career that highlights the intersections of film theory, film production, cinephile culture, and politics in 1960s Japan. Carroll places Suzuki’s work between two factions that claimed him as one of their own after 1968: the New Left and its politicized theoretical practice on one hand, and the apparently apolitical cinephiles and their formalist criticism on the other. He considers how both of these strands of film theory shed light on the distinctive qualities of Suzuki’s films, and he explores how both Suzuki’s works and unheralded Japanese film theorists offer new ways of understanding world cinema.

This book presents both a major reinterpretation of Suzuki’s work—which influenced directors such as John Woo, Jim Jarmusch, and Quentin Tarantino—and a new lens on postwar Japanese film culture and industry. Suzuki Seijun and Postwar Japanese Cinema also includes a complete production history of Suzuki’s filmography along with never-before-discussed information about his unfinished film projects.