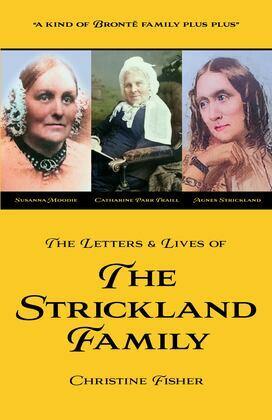 by Christine Fisher (Author)
Buy for $12.94 Read sample online Download sample
Nonfiction Biography & autobiography Historical Literary Women
warning_amber
One or more licenses for this book have been acquired by your organisation details

A family containing six authors is special.  When three of them independently become famous, the family is extraordinary.  Such was the Strickland family, six sisters and two brothers, brought up in Suffolk, England with Lancastrian forbears and Canadian descendants.

‘The Strickland Family’ interweaves family letters, writings and newspaper items, allowing the family members to tell their own fascinating and varied life stories.  Set in England and in Canada, their lives stretched from 1794 when King George III was on the throne, past celebrations for Queen Victoria’s Diamond Jubilee in 1897.

Their father was a wealthy self-made man who believed that girls should be as well-educated as boys.  The home education he devised for his daughters was of great breadth and depth.  His sons were his two youngest children and went to schools.  However a business deal went wrong in 1815 and he died in 1818 before he could re-coup the losses.  He left his widow with debts, not income, and his sons’ education was cut short.  After his death, life for his family was a struggle, but they survived and to varying degrees prospered.

Three of the family (Sam Strickland, Susanna Moodie and Catharine Parr Traill) were early emigrants to Canada.  Their first homes were primitive log cabins in small forest clearings.  As time passed and Canada developed, Sam became a successful farmer and businessman.  His sisters struggled with Canadian pioneer life but both achieved long-lasting fame as writers - Susanna as a poet and novelist, Catharine through her writing for children and her botanical studies.

Agnes Strickland was the most famous member of the family.  She attended the Court of Queen Victoria and was a house guest in some of the grandest houses in Britain.  Her sister and sometime co-author (Elizabeth Strickland) insisted on remaining anonymous, despite the complications this caused when their series of royal biographies ‘Lives of the Queens of England’ became an outstanding success. Agnes followed this with a biography of Mary Queen of Scots, which she considered her most important work.

Jane Margaret Strickland, despite ill health and being the sister who stayed at home to care for their ageing mother, was also an author of note.  Her many works included a history of Rome and a biography of her sister, Agnes.

Of the two non-authors in the family, one (Sarah) became, in her second marriage, the wife of Richard Gwillym, a wealthy and well-connected vicar in Lancashire.  The other (Tom) joined the merchant navy aged fourteen.  As captain of beautiful but hazardous sailing ships, his working life took him all round the world.

Despite the distances which separated them, family ties remained strong and they helped each other in times of need.  Their interwoven biographies trace many of the changes and main events in Canada and England in the 19th century.