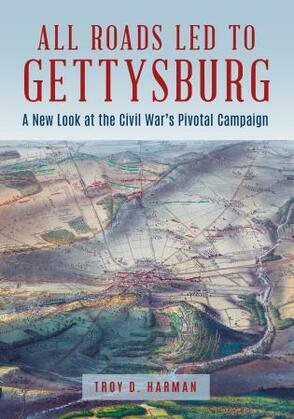 All Roads Led to Gettysburg

A New Look at the Civil War's Pivotal Battle
by Troy D. Harman (Author)
Buy for $28.50 Excerpt
Nonfiction History History by country United States Historical period Civil War period (1850-1877)
warning_amber
One or more licenses for this book have been acquired by your organisation details

It has long been a trope of Civil War history that Gettysburg was an accidental battlefield. General Lee, the old story goes, marched blindly into Pennsylvania while his chief cavalryman Jeb Stuart rode and raided incommunicado. Meanwhile, General Meade, in command only a few days, gave uncertain chase to an enemy whose exact positions he did not know. And so these ignorant armies clashed by first light at Gettysburg on July 1, 1863. In the spirit of his iconoclastic Lee’s Real Plan at Gettysburg, Troy D. Harman argues for a new interpretation: once Lee invaded Pennsylvania and the Union army pursued, a battle at Gettysburg was entirely predictable, perhaps inevitable.

Most Civil War battles took place along major roads, railroads, and waterways; the armies needed to move men and equipment, and they needed water for men, horses, and artillery. And yet this perspective hasn’t been fully explored when it comes to Gettysburg. Look at an 1863 map, says Harman: look at the area framed in the north by the Susquehanna River and in the south by the Potomac, in the east by the Northern Central Railroad and in the west by the Cumberland Valley Railroad. This is where the armies played a high-stakes game of chess in late June 1863. Their movements were guided by strategies of caution and constrained by roads, railroads, mountains and mountain passes, rivers and creeks, all of which led the armies to Gettysburg. It’s true that Lee was disadvantaged by Stuart’s roaming and Meade by his newness to command, which led both to default to the old strategic and logistical bedrocks they learned at West Point—and these instincts helped reinforce the magnetic pull toward Gettysburg.

Moreover, once the battle started, Harman argues, the blue and gray fought tactically for the two creeks—Marsh and Rock, essential for watering men and horses and sponging artillery—that mark the battlefield in the east and the west as well as for the roadways that led to Gettysburg from all points of the compass. This is a perspective often overlooked in many accounts of the battle, which focus on the high ground—the Round Tops, Cemetery Hill—as key tactical objectives.

Gettysburg Ranger and historian Troy Harman draws on a lifetime of researching the Civil War and more than thirty years of studying the terrain of Gettysburg and south-central Pennsylvania and northern Maryland to reframe the story of the Battle of Gettysburg. In the process he shows there’s still much to say about one of history’s most written-about battles. This is revisionism of the best kind.