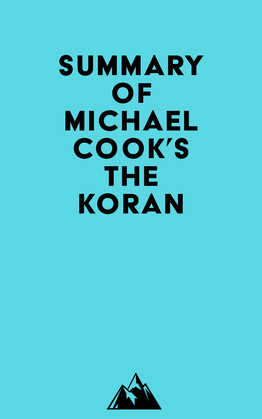 Summary of Michael Cook's The Koran

by   Everest Media (Author)
Buy for $3.99 Excerpt
Nonfiction Religion Islam
warning_amber
One or more licenses for this book have been acquired by your organisation details

#1 The fact that a text can be preserved beyond the moment of its creation shows that it has authority. The words of a nursery rhyme are not as authoritative as, say, the Constitution of the United States of America.

#2 The word scripture is often used to describe the Koran, but not the Bible. The distinction between the two is that the Bible is a written text, while the Koran is a written and a oral text.

#3 The Koran is the Muslim scripture, and Islam is the religion established among the Arabs by the Prophet Muḥammad in the early seventh century. The message was revealed in Arabic, the language of the people it was addressed to.

#4 The Arab conquests, which took place from the late seventh century onwards, led to the creation of the Islamic empire, which stretched from what is now Portugal to what is now Pakistan. The Islamic empire was strongly identified with Islam, and within it there developed the culture we know as Islamic civilization.