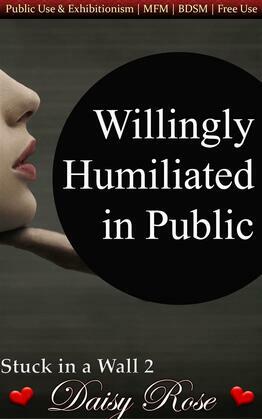 Book 2 of 'Stuck In A Wall'
by Daisy Rose (Author)
Buy for €2.99 Excerpt
Fiction Erotica
warning_amber
One or more licenses for this book have been acquired by your organisation details

Jenny has a good career, a cozy apartment, and a generally boring, but comfortable life. She didn't set out to change any of that deliberately. She's just looking for a little bit of excitement in her life. Weeks later, she's stripping and climbing into the hole, getting herself stuck willingly so she can get off on the fantasy of being filled up while she can't even see the person doing it.

Jenny is bored out of her mind.

That's pretty much the norm for whenever she has to make use of her company leaves. She doesn't like leaving her apartment and does not particularly enjoy travelling, so she says home, even when she has nothing else better to do.

It's not how normal people picture their holidays. It's only Friday and she has the long weekend ahead and she is already contemplating an impromptu road trip, which is a monumentally bad idea because she's done it before and she is always reminded of how much she hates leaving her apartment. All her stuff are here.

No, short trips are the way to go, but there really isn't anything nearby that would help her burn a few hours.

Her mind wanders, as it often does, to that abandoned building she keeps walking past on the way back from work. It's a boring little place, honestly. Mostly like her. Except for that hole in the wall that looks suspiciously human-sized.

She's not even supposed to be walking in this part of town, but it cuts a cool twenty minutes off her trip home compared to if she were to take the long (proper) way back, and there's that adage about time being money and she's saving a bunch of money every day by taking that short cu.

Anyways, back to that hole. She doesn't know why she thinks about it as much as she does, but when she's in her bed alone at night, she thinks about climbing through that same hole and well... getting stuck there.