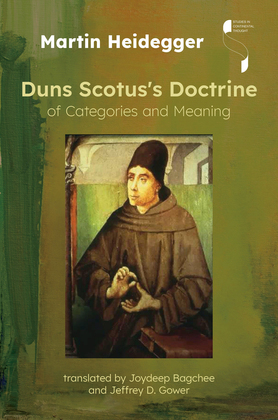 Duns Scotus's Doctrine of Categories and Meaning is a key text for the origins of Martin Heidegger's concept of "facticity." Originally submitted as a postdoctoral thesis in 1915, it focuses on the 13th-century philosopher-theologian John Duns Scotus.

Heidegger first analyzes Scotus's doctrine of categories, then offers a meticulous explanation of the Grammatica Speculativa, a work of medieval grammar now known to be authored by the Modist grammarian Thomas of Erfurt. Taken together, these investigations represent an early foray into Heidegger's lifelong philosophical concerns, "the question of being in the guise of the problem of categories and the question of language in the guise of the doctrine of meaning."

This new and unique translation of one of Heidegger's earliest works offers an important look at his early thinking before the question of being became his central concern and will appeal to readers exploring Heidegger's philosophical development, medieval philosophy, phenomenological interpretations of the history of philosophy, and the philosophy of language.