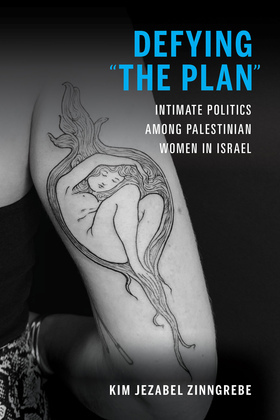 Intimate Politics among Palestinian Women in Israel
by Kim Jezabel Zinngrebe (Author)
Buy for $31.99 Excerpt
Nonfiction History History by country Middle East Israel Religion Religion and society Social science Sociology
warning_amber
One or more licenses for this book have been acquired by your organisation details

Living under settler colonialism and patriarchal oppressions, Palestinian women in Israel are expected to operate even the most intimate aspects of their lives according to what some call "The Plan," which dictates everything from clothing, marriage, religion, and sex to how children are born and raised.

In Defying "The Plan," Kim Jezabel Zinngrebe draws from a series of moving interviews to reveal that despite various forms of intertwined oppressions by both the Israeli state and Palestinian society, Palestinian women show defiance by the quotidian choices they make in their own intimate lives under occupation, which, Zinngrebe argues, cannot be perceived as a mere corollary but constitute a pivotal and contested terrain of the struggle between settler and colonized. Defying "The Plan" explores such issues as the segregation of sexual education in Palestine; the politics of dress, menstruation, and tattoos; and the roles of class, feminism, and race. Importantly, she highlights the intersectional experiences of women typically excluded from existing accounts, such as Black Palestinian women, women with disabilities, unmarried and divorced women, Bedouin women, and LGBTQI women.

The stories gathered in Defying "The Plan" trace and unpack settler colonial power at the level of the intimate and native women's various practices of defiance.