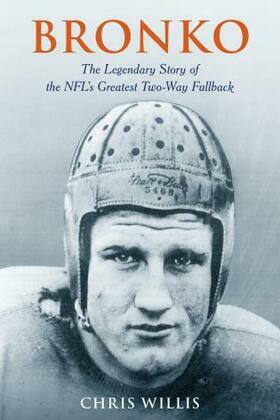 The Legendary Story of the NFL's Greatest Two-Way Fullback
by Chris Willis (Author)
Buy for $42.50 Excerpt
Nonfiction Biography & autobiography Sports History History by country United States Nature, recreation and sports Sports & recreation Football History
warning_amber
One or more licenses for this book have been acquired by your organisation details

The remarkable biography of a small-town athlete who became one of the greatest players in NFL history.

Bronislau “Bronko” Nagurski was a superstar for the NFL in the 1930s and one of the pioneer players of the league. He led the Chicago Bears to success on the gridiron as a larger-than-life personality, helping raise the popularity of the NFL during the Great Depression.

In Bronko: The Legendary Story of the NFL’s Greatest Two-Way Fullback, NFL Films historian Chris Willis tells the remarkable story of how Bronko became an NFL legend. Throughout his nine-year NFL career, Bronko’s name became synonymous with power football. While the new league fought to gain respect and recognition, Bronko immediately captured the attention of sports fans in Chicago and across the country. The bruising fullback could do everything: run, block, tackle, and even throw the occasional pass.

With the complete cooperation of the Nagurski family and unlimited access to personal letters, family scrapbooks, and photos, Bronko is the definitive biography of a true sports pioneer and NFL great.