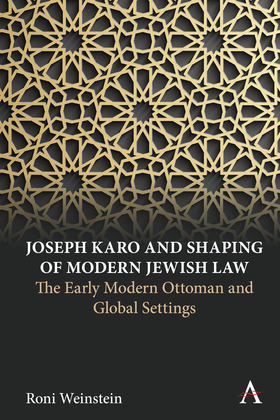 The Early Modern Ottoman and Global Settings
by Roni Weinstein (Author)
Buy for $40.00 Excerpt
Nonfiction Law History of law History History by country Middle East Turkey & Ottoman empire
warning_amber
One or more licenses for this book have been acquired by your organisation details

The early modern period witnessed the rise of impressive empires in the Eurasian context, in Europe and not less so in the east – The Ottoman, Safavid, and Mughal Empires. The construction of large and stable empires necessitated the constructions of unprecedented power mechanisms. History of law and legality in the early modern period was playing a crucial role in these changes.

Born in Spain and joining his family as refugees from the great expulsion from the Iberian peninsula, heading east to the Ottoman Empire, Karo, as the rest of Sephardi intellectuals, was deeply acquainted with both European [Canon law, ius comune] and Ottoman [Shari'a, Kanuname] legal traditions, and their transformative processes during the early modern period.

The codes of law, in the short and long version, composed by R. Karo mark a watershed turn, and they were never superseded until the present. In composing them, Karo intended to respond to the global changes in law, and to update Jewish Halakhah to current political and cultural circumstances. The books suggest both a global reading of Jewish law, and a sociological perspective of Halakhah. It adds a further dimension on modernization of Jewish culture.