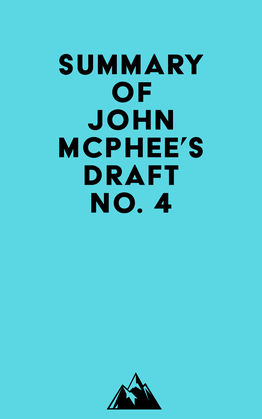 Summary of John McPhee's Draft No. 4

#1 I wrote three pieces that became a book called Encounters with the Archdruid. I had been writing profiles for more than a decade at Time magazine and then at The New Yorker, and I was desperate to escalate.

#2 I decided to do a double profile, through a process similar to the one I described above. I would meet myself coming the other way. I would not be able to do that without a copy of the CBS tape.

#3 The choice of subject for a piece of writing is never a simple one. You may take a month, or ten months, or several years to turn one idea into a piece of writing, and yet you still only choose one subject over all other concurrent possibilities.

#4 The environmental movement was in its early stages in the 1960s, and I decided that it would be the subject of ABC/D. I wanted to interview Floyd Dominy, the United States Commissioner of Reclamation. He built very big Western dams, and he was a very tough Western guy.