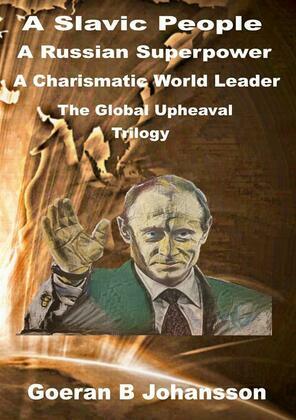 A Slavic People A Russian Superpower A Charismatic World Leader

The Global Upheaval Trilogy
by Goeran B Johansson (Author)
Buy for €1.49 Excerpt
Nonfiction History 1945-1989
warning_amber
One or more licenses for this book have been acquired by your organisation details

The Trilogy analyses Vladimir Putin's strategic acting due to the Kosovo war in 1999 when USA/NATO attacked a sovereign European country for the first time after WWII and without UNSC approval and depicts the global strategic development leading up to the 2016 US presidential election.

In part one, he develops and strengthens relations with SCO, the Shanghai Cooperation Organization, that today covers next to the whole of Eurasia. Also, BRICS, Brazil, Russia, India, China, and South Africa.

The author visits Santa Fe and Cebu in the Philippines, where he dialogues with a retired major from the Swedish military intelligence service, a former US commander of the US Pacific Fleet, and a retired colonel for the border police between Mexico and the United States.

Part two describes the continuation of Russia's path towards global recovery. It describes developments globally and mainly in Eurasia around the events in Ukraine. A comprehensive description and analysis of the United States' hundred-year strategy in Eurasia connected with the two world wars. Russia's military rearmament and several visits by the author to Santa Fe, Philippines, and Vietnam, followed by an interview and dialogue with a Swedish retired officer from the Swedish military intelligence service as well as a Russian researcher and geopolitical expert in Ho Chi Minh Town in Vietnam.

Part three begins the book with a comprehensive analysis of the MH 17 tragedy over eastern Ukraine. It is followed by a review of ISIS and the background to the conflict in the Middle East in the shadow of the importance of oil and concerning the US Pax Americana advance. Further description of Russia's military rearmament occurs to a lesser extent, but the extremely dramatic development in the South China Sea is examined all the more.

Vladimir Putin's strategy in Syria and the Middle East is analyzed in detail.