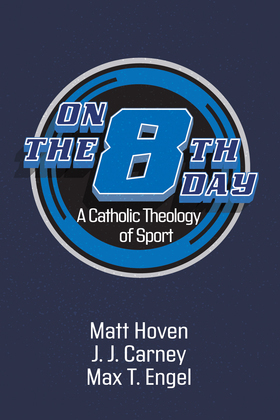 On the Eighth Day

A Catholic Theology of Sport
by Matt Hoven (Author), J. J. Carney (Author), Max T. Engel (Author)
Buy for $25.00 Excerpt
Nonfiction Religion Catholic Christianity
warning_amber
One or more licenses for this book have been acquired by your organisation details

During a 1980s Edmonton Oilers game, fans unveiled a banner claiming, "On the 8th
day, God created Gretzky." Intersections between religious belief and sporting
participation are nothing new, where players, coaches, and fans are known to pray,
cross themselves, and point to the heavens during a game. But what should be the
relationship between sports and religious faith?

On the Eighth Day introduces the theology of sport from a Catholic standpoint. It
wrestles with sport's universal appeal, its rich symbolism, and its spiritual and moral
characteristics. Sport is a place where embodied games can be sacramental; where
traditions of the past speak to contemporary peoples; and where truth and justice are
demanded in a world affected by sin.

The eighth day recalls the playful, re-creative work of God the Creator embodied
in Christ's resurrection. In this sense, this book marks out a "new day" in Christian
attitudes toward modern sport and the continuing call to redeem sport in service of
human flourishing. Comprehensive yet accessible, the book will engage thoughtful
lay sports fans and academic students alike.