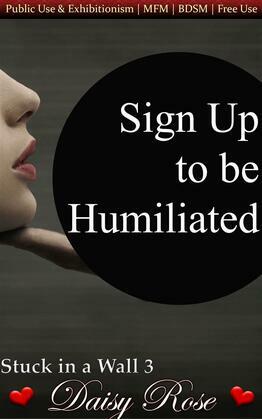 Book 3 of 'Stuck In A Wall'
by Daisy Rose (Author)
Buy for €2.99 Excerpt
Fiction Erotica
warning_amber
One or more licenses for this book have been acquired by your organisation details

Allison is not the most popular girl on campus. Her reputation as a snitch is earned from her tattling on her peers whenever they mess up, but she's an RA for her building, which means she's totally supposed to stitch on them. It also means that she doesn't get invited to parties. So when she suddenly gets invited to a frat party, she is understandably suspicious...

"You're taking too long!" the person standing next to her shouts, and she realizes with a jolt that she recognizes him. He's Dean from her Arts class. He's always so quiet and soft-spoken in class, speaking only when spoken to and his art, while not impressive, is mellow, with lots of greens and blues. Right now, he's jerking off as he shouts at the couple.

It was different, earlier, when she couldn't identify a single person in the crowd and these are all strangers to her, but now that she is looking at their faces instead of their bodies and mannerism, she recognizes a few of them. There's Kimberly, who is two floors down and prone of burning popcorn in the microwave and setting off the fire alarm and she's sucking a guy who she doesn't recognize, but is tugging her dress all the way up to her breast.

A little further down is Annie, who just moved into the dorms a few weeks ago and is having a little bit of trouble finding her footing as a transfer student from out of state. She is always dressed like she's preparing for winter, covering herself from head to toe even indoors. She remembers worrying if there's something wrong with her heating system in her room and making sure there's not. She's not wearing anything right now, fully naked as several men take the opportunity to touch her everywhere, trampling all over her clothes that have been strewn all over the ground.

Allison worries a little about how she's going to collect those clothes and put them back on later and then quickly shakes her head because that's definitely not in Annie's mind right now.

She looks away, her mouth completely dry and has all the intention to turn around and leave, but then the sound of even more people gathering behind her pushes the crowd forward even more and she hears their exclamation of, "Lilith! You go girl!" and scatterings of, "Woo! Yeah! I knew you could do it!"

The girls behind her seem to be friends with Lilith, who is evidently much too busy to acknowledge her friends. They shove everyone forward a little more in their effort to get to the front of the crowd and see what's happening.

As a result, Allison finds herself standing so close to the main event that she could reach out and touch one of the guy's perfectly sculpted-

She shakes her head and tries to squeeze a little further back, making use of her smaller size to ease herself between gaps and flit through the gathering of people. There are people holding phones up above them way in the back so they can see what's happening.

After several more failed attempts, she gives up and accepts that she's going to be stuck here until the crowd thins or the couple finishes.