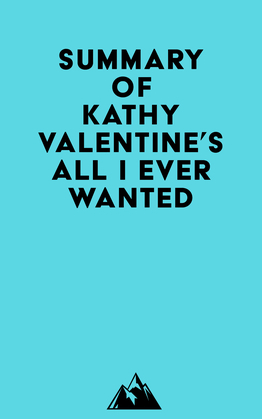 Summary of Kathy Valentine's All I Ever Wanted

#1 I had moved to Los Angeles in 1980 to start a band. I had met Charlotte Caffey, the bassist for the Go-Go’s, at a show in Austin. She asked me to play bass with their band. I agreed.

#2 I learned how to play bass for the Go-Go’s, and after three days of coke binges, I was able to play their songs perfectly. I had never sustained such an undiluted, deep focus.

#3 I met the drummer, Gina Schock, and the lead singer, Belinda Carlisle, at Stone Fox rehearsal studio in the Valley. They liked what they heard and felt, and the four Go-Go’s whooped and yelled in response.

#4 I had never played a sold-out show in my life. The audience was infatuated with Belinda, and I forgot about the interruption. I was excited to play again for the second show, and three more nights after that.