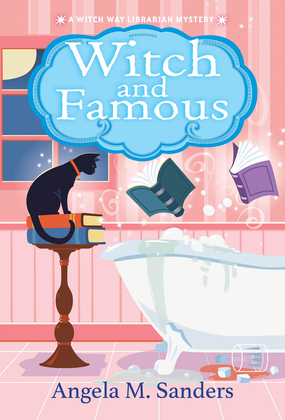 by Angela M. Sanders (Author)
Buy for $0.99 Excerpt
Fiction Mystery & detective Women sleuths
warning_amber
One or more licenses for this book have been acquired by your organisation details

For a tiny town, picturesque Wilfred, Oregon, has everything, including an impressive library housed in a Victorian mansion, a touch of magic in new librarian and fledgling witch, Josie Way, a visiting movie star—and a curious tendency toward murder . . .

Josie and all of Wilfred are buzzing with excitement. A-list movie star Daphne Morris has chosen to interview Roz, assistant librarian and novelist, for her book club. But when the glamorous actress quickly charms both Roz’s long-time love and sheriff Sam, the object of Josie’s unrequited affection, Josie turns to the whispers from her beloved books for ideas on revising the plot. Yet soon there’s another twist . . .

At a party to celebrate the interview, Daphne’s personal chef is found dead in a scene that all too closely echoes one in Roz’s novel. It’s clear to Josie that someone’s idea of a happy ending means framing her friend. She’ll have to read between the lines with the help of the library’s enchanted stacks, guidance from her magical grandmother’s letters, and her cat familiar, Rodney, to solve this murder before someone decides to stage a deadly sequel . . .

“Full of false leads and truly surprising reveals, this terrifically plotted mystery is hard to put down.”
—BookPage

“This cozy mystery has the right balance of suspense and quirky, small-town humor.”
—Library Journal