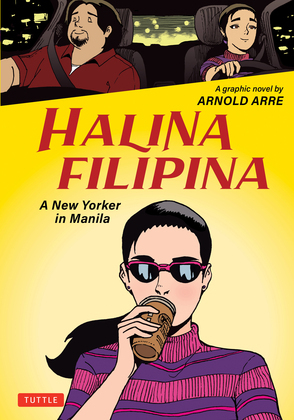 When two cultures collide, the results are explosive--a graphic novel rom-com like no other!

Halina Mitchell is half-Filipino, half-American. She's also a native New Yorker--sophisticated, beautiful and confident. On her first visit to the Philippines, she arrives in Manila to reconnect with relatives only to encounter a world of surprises that turn all her assumptions on their head. With the intrepid film critic Cris as her guide, she discovers a Manila that few others get to see!

Cris's wry takes on bad movies offer Halina a new lens on the modern world as he whisks her through his hometown at breakneck speed--including a crash course in Manila street life and the thrills and perils of midnight driving. In turn, Halina gives the struggling writer a newfound appreciation for his city.

Perfect for fans of "opposites attract" romances like Fangs and The Prince and the Dressmaker, this book offers a rom-com take on modern life and a touching story of friendship, love and crosscultural (mis)understanding from a renowned graphic novel pioneer.

Captured in Arre's distinctive style, Halina Filipina is about finding one's place in the world--or in two worlds at once!