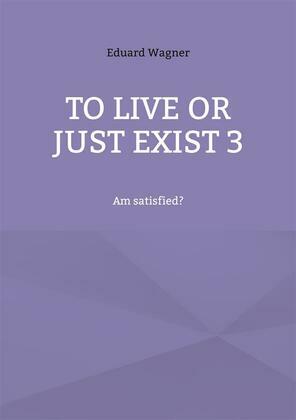 To live or just exist 3

Am satisfied?
by Eduard Wagner (Author)
Buy for €9.99 Excerpt
Nonfiction Human science Philosophy
warning_amber
One or more licenses for this book have been acquired by your organisation details

It may well be that the book turned out a bit hearty, what is described there, but everything happened as it is stated there. Sure, there are a lot of memoirs and these are maybe the ones where you could say it was a normal life, but this is also the view of how I experienced my existence. But that doesn't mean that I blame anyone in my environment or the like, but rather that everything is based on my own decisions. At the time, I couldn't judge whether they were right or wrong, but only afterwards. 95% of the time I made up my mind to do it that way. Whether or not I would have been told something is a different question. But what will certainly be with me until the end of my life, in whatever form, is that a person thinks of another with character assassination in order to perhaps give his career an impetus. If at that time facts and not estimates had been passed on as facts from finance to the judiciary, my life would probably have taken a different course. Even if it was found from this cause that I was guilty of some legal violations, I am convinced and that until the end of my life that I am innocent. I decided to protect my son with my approach. You may think what you want now, I have decided on the right path for myself, otherwise my son might not be alive today. I can't necessarily answer whether I'm happy with my current life or not, because I think that's a very personal point of view. I am happy. Why? On the one hand, my existence now runs calmly in contrast to what I was already able to experience, on the other hand I am very happy that I was able to get rid of my addiction that had accompanied me for over 3 decades. I don't know how that happened in 2014. Was it a higher power or was it that I was closer to suicide than I wanted to admit to myself. Anyway, I won't question it. Perhaps the whole thing that I am giving is an experience that could be of use to one or the other. But that doesn't mean that I condemn what I would have experienced, no, on the contrary. In the meanwhile, six decades of life there have certainly also been beautiful moments, and one of the others that comes to mind is the birth of my son. Judge for yourself whether this existence is worth living or not.