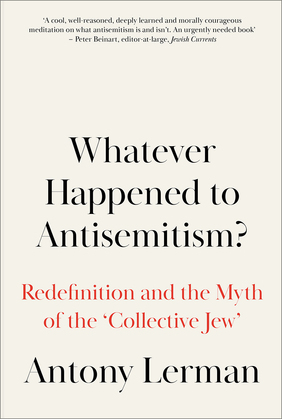 Whatever Happened to Antisemitism?

Antisemitism is one of the most controversial topics of our time. The public, academics, journalists, activists and Jewish people themselves are divided over its meaning. Antony Lerman shows that this is a result of a 30-year process of redefinition of the phenomenon, casting Israel, problematically defined as the ‘persecuted collective Jew’, as one of its main targets.

This political project has taken the notion of the ‘new antisemitism’ and codified it in the flawed International Holocaust Remembrance Alliance’s ‘working definition’ of antisemitism. This text is the glue holding together an international network comprising the Israeli government, pro-Israel advocacy groups, Zionist organisations, Jewish communal defence bodies and sympathetic governments fighting a war against those who would criticise Israel.

The consequences of this redefinition have been alarming, supressing free speech on Palestine/Israel, legitimising Islamophobic right-wing forces, and politicising principled opposition to antisemitism.