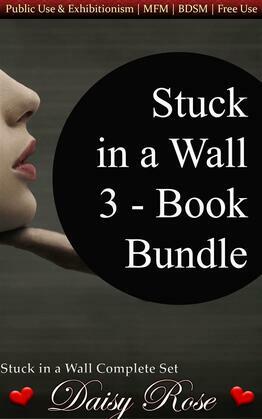 Stuck In A Wall 3-Book Bundle

by Daisy Rose (Author)
Buy for €6.49 Excerpt
Fiction Erotica
warning_amber
One or more licenses for this book have been acquired by your organisation details

The three young women in these three steamy short stories are stuck with nowhere to go. Literally. In this bundle, you will find Used by Strangers in Public, Willingly Humiliated in Public, and Sign Up to be Humiliated.

Excerpt from "Used by Strangers in Public":

You're not too sure that you aren't, seeing as you sorted by the highest paid job posting and then proceeded to take the one at the very top.

They ask you if you're sure.

They remind you that if you safe word too early into your first job, your contract will be terminated.

You know (you actually don't, but you don't want to seem ignorant). How early is early? you ask after pausing a moment.

Before the second penetration, they say.

Oh, that's not going to be a problem then, you say, relieved. You have a feeling the person you're talking to is blushing. You seem to have that effect on people. You talk big, but you've not actually done anything like this before.

They ask you again if you're certain you want to pick up this particular listing. They read out the other selections for you, something smaller, they say. How about the one in a train.

It's not even a real train, you tell them, unimpressed. It's a caboose.

It's one of those railway wagons that's attached to trains, which means it won't actually be moving and even if it is, it means someone, probably one of the guys who's into it, paid to have the train coupled.

They ask you about the one in the theater, with where the patron would meet you in the bathroom and take you there.

They pull up another job listing, one with bondage and group involvement and ask if you would prefer that one instead, if you're into numbers and being taken by several men at once.

You enjoy the dichotomy between the caller's professional tone and the sexual words that they're uttering. No, you repeat once you realize that they're waiting for an answer.

Everything's just too controlled, you say.

You thank them, but they've already hung up.

The documents arrive in your inbox half and hour later. You have a feeling it only took so long because they've lost the original documentation and they had to come up with a new one from scratch. They probably wasn't hopeful that someone would pick up the listing at all.

You're insane. But you really want to do this. You want to be used by strangers in public.