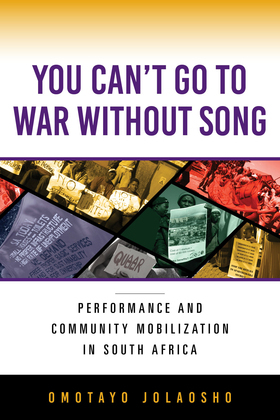 You Can't Go to War without Song

Performance and Community Mobilization in South Africa
by Omotayo Jolaosho (Author)
Buy for $44.99 Excerpt
Nonfiction Social science Anthropology History History by country Africa South
warning_amber
One or more licenses for this book have been acquired by your organisation details

You Can't Go to War without Song explores the role of public performance in political activism in contemporary South Africa. Weaving together detailed ethnographic fieldwork and an astute theoretical framework, Omotayo Jolaosho examines the cohesive power of protest songs and dances within the Anti-Privatisation Forum (APF), one of many social movements that emerged in the wake of South Africa's democratic transition after 1994.

Jolaosho demonstrates the ways APF members adapted anti-apartheid songs and dance to create new expressive forms that informed and commented on their struggles for access to water, electricity, housing, education, and health facilities, the costs of which had been made prohibitive by privatization.

You Can't Go to War without Song offers profiles of individual activists to amplify its central point: social movements like the APF are best understood as the coming together of individuals, and it is the songs and dances of the movement that bind these individual together and create opportunity for community organization. Chapters on women and youth complicate such understandings of community, however, showing how activist live and experiences are shaped by gender and generation.