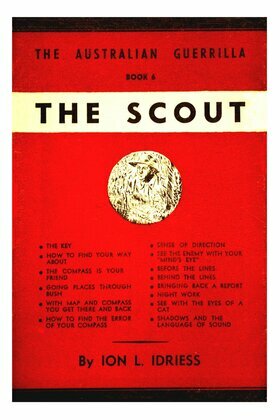 Throughout all the game of war, in every Age, there has been no task so fascinating, so alive with thrills, as that of the scout. Against an enemy army he plays a lone hand as does the sniper. But the scout's job is not to hide and kill, his is to press forward and see, but never be seen. And - he must return.
Ion Idriess's Australian guerrilla manual presents a rare insight into one of the most vital functions of small-unit combat intelligence - scouting. Despite great technical achievements in modern military science, the small-unit commander must still rely heavily on the eyes, ears and stealth of his scouts. Details obscure techniques often overlooked in most U.S. Army and Marine scouting texts.
The sixth book of the Australian Guerrilla series, The Scout, by Ion Idriess is now available. It is packed with knowledge and bush lore, and gives to any soldier who studies it most of the data necessary for the job of scouting. With the rest of the series it provides a small compact little work that, carried in the haversack, is a means of learning as you go. - Hobart Mercury, 1943.