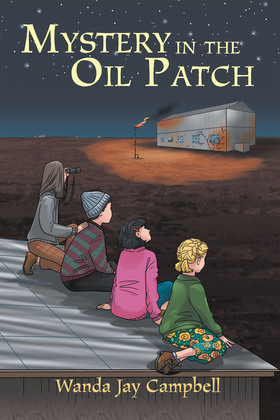 Mystery in the Oil Patch

It is August 1939, and free-spirited ten-year-old Melvina Clarke is happy on the family ranch north of Fort Worth. Because of a family crisis, a reluctant Mel must go to the West Texas oil patch for a four-month stay. She has to live in an oil company camp with her aunt Margie, uncle Ray, cousin Polly, and Polly’s dog, Snatcher.

While adapting to these new surroundings, Mel deals with homesickness, her meddlesome little cousin, three hecklers at school, and her disinterest in reading. She faces challenges to her independence is challenged when her new friends want her to help organize a club, and then her teacher proposes a class play as a fundraiser to buy books for the town’s new public library. In addition to mishaps at home, church, and school, Mel sees unsettling, ominous lights flashing in an abandoned warehouse near the oil company camp. She must decide whether to trust her new friends with her suspicions or try to solve the mystery by herself. In pursuit of a reason for the lights and other unexplained happenings in the oilfields, Mel faces many obstacles, and one harrowing event forces her to acknowledge her own shortcomings.

Full of humor, suspense, and unexpected twists and turns, this novel follows four friends who work together to solve a mystery in the 1930s West Texas oilfields.