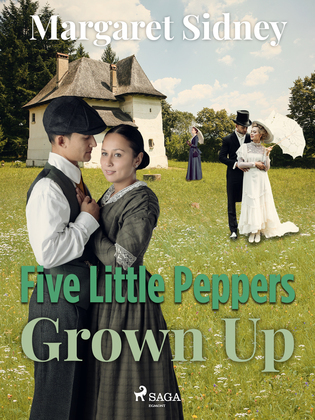 by Margaret Sidney (Author)
Buy for $2.99 Excerpt
Fiction Classics
warning_amber
One or more licenses for this book have been acquired by your organisation details

"Five Little Peppers Grown Up" continues the story of Ben, Polly, Joel, David, and Phronsie Pepper. Together with the Kings, the Whitneys, and other friends old and new, the Peppers learn and teach about life and love as they grow into adulthood.


Margaret Sidney was the pen name of Harriett Mulford Lothrop, née Stone (1844-1924). She was first published at age 34, when two of her stories came out in the Boston children’s magazine "Wide Awake". Following their success, the editor asked her to write more. This led to the publication of her 12 book series "Five Little Peppers". She married her publisher Daniel Lothrop, and after his death, she ran his publishing firm. She later sold it so as to have more time to write, though the company kept publishing her work. Together, the couple had also bought the mansion "The Wayside" in Massachusetts, where both Louisa May Alcott and Nathaniel Hawthorne had previously lived. Sidney was a member of the Daughters of the American Revolution, and the founder of the Children of the American Revolution. She wrote over 30 novels.