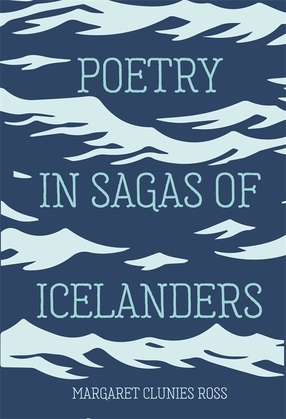 Poetry in Sagas of Icelanders

by Margaret Clunies Ross (Author)
Buy for $24.95 Excerpt
Nonfiction Literary essays
warning_amber
One or more licenses for this book have been acquired by your organisation details

Sagas of Icelanders, also called family sagas, are the best known of the many literary genres that flourished in medieval Iceland, most of them achieving written form during the thirteenth and early fourteenth centuries. Modern readers and critics often praise their apparently realistic descriptions of the lives, loves and feuds of settler families of the first century and a half of Iceland's commonwealth period (c. AD 970-1030), but this ascription of realism fails to account for one of the most important components of these sagas, the abundance of skaldic poetry, mostly in dróttkvætt "court metre", which comes to saga heroes' lips at moments of crisis.
These presumed voices from the past and their integration into the narrative present of the written sagas are the subject of this book. It investigates what motivated Icelandic writers to develop this particular mode, and what particular literary effects they achieved by it. It also looks at the various paths saga writers took within the evolving prosimetrum (a mixed verse and prose form), and explores their likely reasons for using poetry in diverse ways. Consideration is also given to the evolution of the genre in the context of the growing popularity in Iceland of romantic and legendary sagas. A final chapter is devoted to understanding why a minority of sagas of Icelanders do not use poetry at all in their narratives.